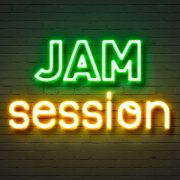 We are happy to introduce the last part of our programme. This year the Italian Fusion Festival hosts, for the first time, a Jam Session.

A jam session is an informal musical event, process, or activity where musicians, typically instrumentalists, play improvised solos and vamp over tunes, drones, songs, and chord progressions. To “jam” is to improvise music without extensive preparation or predefined arrangements, except for when the group is playing well-known jazz standards or covers of existing popular songs.

One source for the phrase “jam session” came about in the 1920s when white and black musicians would congregate after their regular paying gigs to play the jazz they could not play in the “Paul Whiteman” style bands they played in. When Bing Crosby attended these sessions, the musicians would say he was “jammin’ the beat,” since he would clap on the one and the three. Thus these sessions became known as “jam sessions.”

The jam sessions in Dublin started about 9 years ago, organised weekly, to play jazz standards in a relaxed atmosphere and to create a community of musicians in Dublin. The person who came up with the idea is an Italian, Marco Santaroni, who from the beginning involved some musicians in the organization (including Marco Francescangeli who is looking after the session at the festival). It was initially at the Grand Social, later moved to various other places (International Bar, Music café, Bohemian bar in Phibsboro, Hot Spot in Greystones). The jams are free, and very inclusive and accessible. Find musicians of all levels: professionals, hobbyists, and students. There is a Facebook page and a Meetup group to promote/organise the jams.