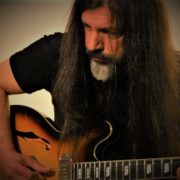 We are happy to introduce the blues part of our lineup. This year the Italian Fusion Festival presents Frank Francone.

Frank Francone is a blues and rock guitarist and singer. In his career Frank played with several Bands and Artists in Italy, France and Ireland, such as Karl Potter (U.S.A.), Cheryl Porter (U.S.A.) and, in Ireland, with Dermot Byrne, Don Baker and with the Jim Finn Blues Band (Australia). He also collaborates in some projects of films and documentaries.