You are here: Home / Interviews

In this edition, we will interview two Italian musicians: Roy Paci and Francesco Furlanich. 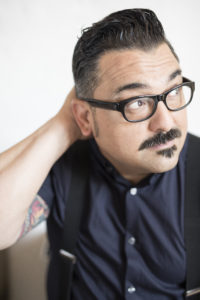 Roy Paci is a singer, trumpeter, composer, record producer and founder of the Etnagigante label and production company. Born in Augusta (Syracuse, Italy) in 1969, he began playing the piano at a very young age and started playing the trumpet at the age of ten.

In 35 years of career, he has produced and participated in more than 500 albums, collaborating with the likes of Manu Chao, Mike Patton, Negrita, The Ex, Vinicio Capossela, Gogol Bordello, Macaco, 99 Posse, Daniele Silvestri, Bombino, Caparezza, Hindi Zahra, Ivano Fossati, Subsonica, Piero Pelù, Marlene Kuntz, Frankie Hi-nrg, Tony Levin and many others. He has made soundtracks for cinema, TV and theatre receiving various awards including the prestigious Nastro d’Argento and a nomination for the David di Donatello.

With his band Aretuska, he animated European and Latin American stages with a hybrid but personal sound which marries his regional Mediterranean quotes with Latin rhythms such as samba and cumbia, as well as ska, reggae, R & B and Jazz. Other active projects include Banda Ionica, Corleone and Orchestra del Fuoco and for 5 years he has been the artistic director of Uno Maggio Taranto.

Among the latest releases is Fight for freedom: tribute to Muhammad Ali (Etnagigante, 2017) in collaboration with Remo Anzovino. At the end of September of the same year, he released two singles, Tira (with text written by Daniele Silvestri) and Revolution, followed by Valelapena (Etnagigante / Artist First), the sixth album by Roy Paci & Aretuska. In February 2018 he participated to the 68th edition of the Sanremo Festival together with Diodato with the song Ora.

In July 2018 the last single Roy Paci and Aretuska released Salvagente (Etnagigante / Artist First), with the participation of Willie Peyote, one of the most brilliant rappers of the moment. A track with a funky groove won the Amnesty International Prize “Voices for Freedom” 2019.

In February 2019 he duetted with Negrita and Enrico Ruggeri at the 69th edition of the Sanremo Festival and in June the new single of Mamacita in feat was released. While tirelessly continuing the “Valelapena Tour” around Itay, Roy Paci started his collaboration in theatre playing as an actor and author of the music of The Knights by Aristophanes at the 2018  Greek Tragedy Festival in Syracuse (Italy). Shortly after his first theatrical show, Carapace premiered in March 2019. Carapace sees him on stage as an actor as well as a musician, accompanied by the Corleone Ensemble. In December 2019 he return to Corleone, experimental and avant-garde jazz with references to many other artists.

In May  2020, Roy released, Siamo Capaci, in the occasion of the 28th anniversary of the mafia attacks to Giovanni Falcone, Francesca Morvillo, Paolo Borsellino and their staff.  The event, entitled “the courage of every day”, was dedicated to the commitment of all citizens who worked for the good of the community in the months of Covid-19 emergency.  Roy Paci also released the single and the video of the song. The text, written in four hands by Roy and Giuseppe Anastasi, wants to be a song of rebirth in a historical period where it is necessary to send a strong message, to avoid sinking our land into the darkness of the past.  All proceeds from the sale of the song will be donated in collaboration with the Ministry of Education to the Pertini school in the Sperone district of Palermo, recently vandalized and to other schools in difficult contexts in the area .; in collaboration with the Free Association in support of educational projects aimed at young Sicilians. 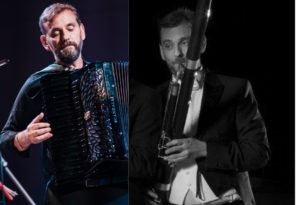 Francesco Furlanich, was born in Trieste in 1969. He graduated in Piano, Bassoon, Organ and Organ Composition.

In 2006 he founded the improvised Jewish music quartet Klezmerata Fiorentina and in 2015 the modern trio Quartocolore, with which, as an accordionist and composer, he explored the sounds and genres of the accordion world.